Ownership is a real right that cedes absolute control over a specific property. An owner is entitled to possess and occupy his property. It is, however, possible to possess a property and not occupy it, and to occupy it and not possess it. Two interesting points is, firstly, both possession and occupation requires some form of physical control whether directly (physical occupation) or indirectly (owner has the keys to the property). Secondly, the difference in terms of these is the possessorís intention to be the owner while the occupierís intention is to gain some benefit from occupying the property. In order to understand the network of rights in property, an organizational chart delineating the different types of rights would assist in this process (see Fig. 1 below). 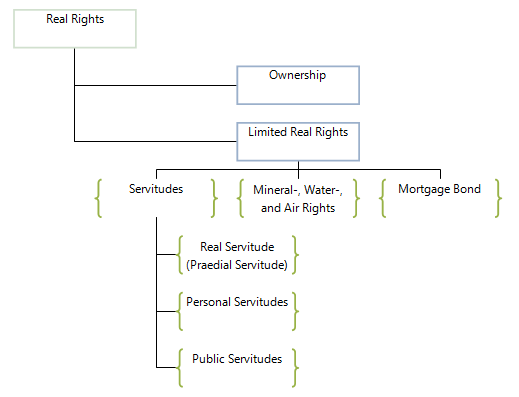 At common law the owner can operate in the following capacities in terms of his property:

Certain common law restrictions such as the law of neighbours are to be upheld by owners of property as to equally promote the rights of all owners:

The general characteristics of a real (praedial) servitude:

The general characteristics of a personal servitude:

A public servitude is a right constituted in the favour of the general public. For example a public outspan, common pasturage, public roads, etc.